Biological iridescence (the vivid, shining colouring of many species) often serves to make individual animals more visible, and as a result, has been hypothesised to contribute to sexual selection. But the fact that it is found in non-reproductive stages makes the sexual selection hypothesis less likely. An alternative (and ) hypothesis is that can work as a form of protection, aiming “to conceal rather than reveal” .

The authors use a coloured beetle species as a test case. The beetle’s wings sport a shiny, shifting and metallic green-blue appearance stemming from structural colour. They then use a series of elegantly simple experiments to test the camouflage hypothesis. First, they put together a collection of hundreds of beetle wing cases, including the iridescent and non-iridescent beetles in a variety of colours, and distributed them in a natural setting amid a variety of plant species. They found, surprisingly, that the iridescent specimens were more likely to survive predation by birds than the non-iridescent variety—even outperforming a leaf-green non-iridescent model that should have blended in with the background colours.

Competing risks concern the situation where more than one cause of failure is possible. It refers to situations where an event has occurred, which prevents occurrence of the primary event of interest. For instance, in this study, predation by non-birds prevents the occurrence of the primary event of interest, i.e. predation by birds. A common assumption is that upon removal of one cause of failure, the risk of failure of the remaining causes is unchanged. That is, the competing risks are assumed independent. While this may be a reasonable assumption in some settings, independent competing risks may be relatively rare in biological applications.

When analyzing survival data in which competing risks are present, analysts frequently censor subjects when a competing event occurs (as done in this study). Thus, when the outcome is time to death attributable to birds, an analyst considers an insect as censored once it dies of non-bird causes (spiders etc). However, censoring insects at the time of death attributable to non-bird causes may be problematic (see Putter, Fiocco, and Geskus (2007) for a review). The next section introduces two ways competing risks can be taken into account.

\[\lambda(t) = \lim_{\Delta t \to 0} \frac{Prob(t \leq T < t + \Delta t | T > t)}{\Delta t}\] where \(T\) denotes the time from baseline until the occurrence of the event of interest. The hazard function, which is a function of time, describes the instantaneous rate of occurrence of the event of interest in subjects who are still at risk of the event. In a setting in which the outcome is, say, all-cause mortality, the hazard function at a given point in time would describe the instantaneous rate of death in subjects who were alive at that point in time.

\[\lambda^{CS}(t) = \lim_{\Delta t \to 0} \frac{Prob(t \leq T < t + \Delta t, \color{blue}{E = k} | T > t)}{\Delta t}\] The cause-specific hazard function denotes the instantaneous rate of occurrence of the \(k^{th}\) event (blue term) in subjects who are currently event free (i.e. in subjects who have not yet experienced any of the different types of events). If one were considering 2 types of events, death attributable to birds and death attributable to non-birds, then the cause-specific hazard of bird death denotes the instantaneous rate of bird death in insects which have not yet experienced either event (i.e., in insects that are still “alive”). The subdistribution hazard function is

Here, I’m interested in modelling the effect of covariates on both hazards and see if that leads us to different conclusions.

The data can be found here2. First, I transform the data for competing risks analysis. I use the following three event type indicators: 1 for bird death, 2 for non-bird death and 0 for censored observations.

I use the survival package to fit the two cause-specific models: cox1 for bird death and cox2 for non-bird death.

I then use the cmprsk package to fit the two subdistribution models: crr1 for bird death and crr2 for non-bird death. 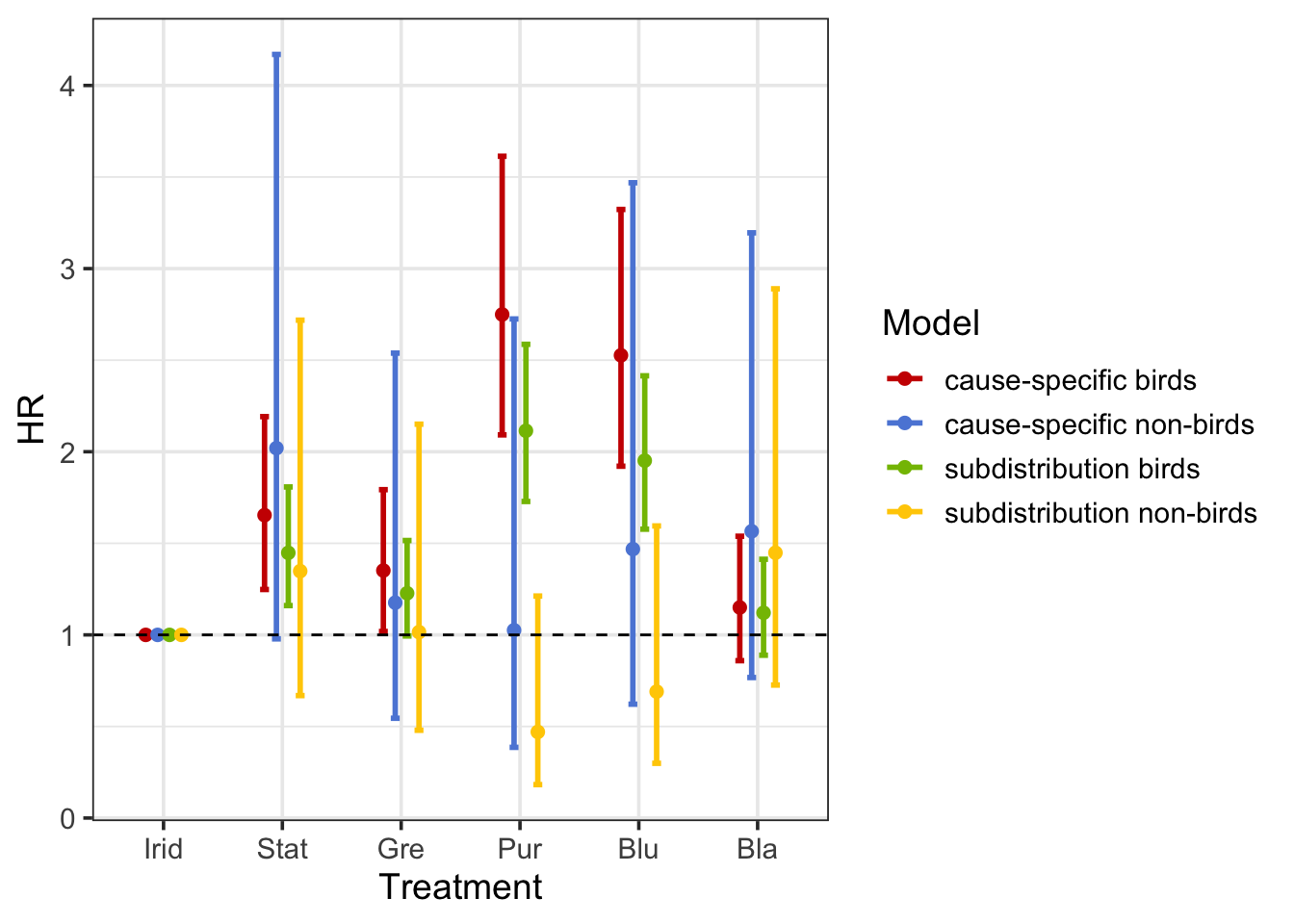 Which one to use?

This example demonstrates that the two approaches may yield different results. This can be explained by the different composition of the risk sets. In the cause-specific model for bird death, insects who died from a non-bird cause were censored and thus removed from the risk sets after their time of death, whereas they were kept in the risk sets after death in the subdistribution model.

As a result, the cause-specific hazard ratio (\(HR^{CS}\)) and the subdistribution HR (\(HR^{SD}\)) do not have the same interpretation. For example4, the \(HR^{CS}\) of 1.65 means that static rainbow insects (‘Stat’ in plot - red), had a hazard of dying 1.65 times higher than iridescent insects, among insects who were alive and did not die from non-bird predators. The \(HR^{SD}\) higher than one (\(HR^{SD}\) = 1.45) means that the cumulative incidence of death is higher in static rainbow insects (‘Stat’ in plot - green) when compared with iridescent ones. However, the numerical value of 1.45 is not straightforward to interpret since it reflects the mortality rate ratio among insects who are alive or have died from non-bird predators. So, the \(HR^{SD}\) is in fact a different quantity than an \(HR^{CS}\), representing a ratio in a non-existing population including those who experienced the competing event.